Harry Smith was 91 when he published this book. Born in 1923 he lived in poverty in the Yorkshire towns of Barnsley and Bradford. He experienced an older sister dying of tuberculosis and his father dying of destitution after a mining accident left him unable to get another job. He joined the RAF during WWII and experienced the security of a job, the camaraderie of working us others to achieve something important whilst seeing the horror of warfare. He  notes how he hated all Germans when he arrived in Holland and saw the starving children who reminded him of his own childhood destitution, but turned from that hatred when he arrived in Germany and again saw  starving children. At a time when it was forbidden to fraternize with the enemy he had a secret relationship with a German woman he met amid the destruction of Hamburg whom he later married when that became legal again in 1946. All the details of his early life give us insight into what a country is like without ‘society’. He witnessed the transformation brought about by the welfare state created by the Labour government post 1945 with the National Health Service and workers’ rights and unemployment support.

Harry emphasizes that people today cannot know what it is like without this real big-society state-organized mutual support. He despairs that the current government is in the process of taking this down. He makes a plea that, like him, people argue for keeping it and vote for keeping it. This is not against change, but for change to help the majority.

I found the book inspiring. 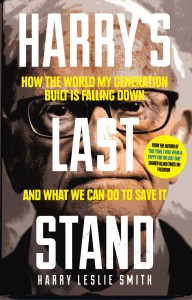